If you have been following this blog over the past couple of weeks, you might have read about my previous articles on deploying RDS on Azure IaaS using ARM and JSON templates. To quickly reiterate those previous articles;

In a first article called “Full HA RDS 2016 deployment in Azure IaaS in < 30 minutes, Azure Resource Manager FTW!” I explained the differences between deployment mechanisms in the classic Azure Portal and the new Azure Portal and gave a brief introduction on what JSON is and how to use Visual Studio to build and deploy directly to Azure, based on JSON templates. I showed the end result of this deployment, a high available RDS deployment on Azure IaaS.

In a second article called “RDS on Azure IaaS using ARM & JSON part 2 – demo at Microsoft Ignite!” I showed some of the enhancements I had built on top the JSON templates. In this article I showed the ability to add publicly trusted SSL certificates, 2 Session Collections with a few sample RemoteApps, configurable Session Timeout settings and the use of 2 storage accounts. This article also contains a link to a session at Microsoft Ignite 2016 where the deployment of this JSON template was shown. 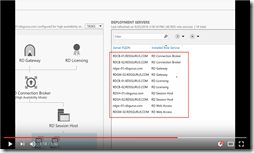 In this article I want share some of the additions that I have been adding to the ARM deployment.

And after completion of the ARM deployment, the selected licensing method is successfully configured in Server Manager. 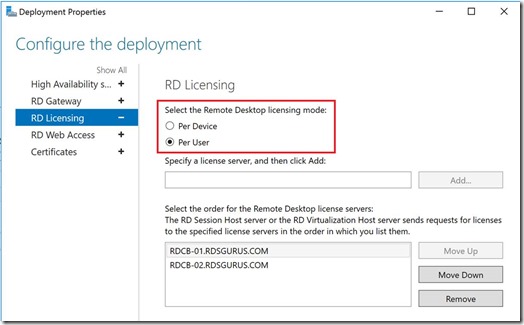 The first option is to copy the custom template image as during the ARM deployment. So, after creating the storage account and before creating the RD Session Host servers. The copy action can be performed using Azure PowerShell, so in order to be able to kick of that PowerShell command as part of ARM we need a “dummy” Virtual Machine and create a Custom PowerShell Extension on that. A good example how to perform this is can be found here: Create VM from a custom image in new storage account. Instead of the “dummy” server you can of course also “abuse” another virtual machine that you are also deploying as part of your ARM deployment and configure the Custom PowerShell Extension on that virtual machine. Also be aware that the copy job can add a significant amount of time to the ARM deployment. In my testing a Windows Server 2016 template with Office 2016 installed took about 15 minutes to complete.

For my ARM template I chose the second option. As part of the parameters the storage account name and the RD Session Host Custom Image can now be provided.

Using the image property of the Virtual Machine we can instruct ARM to use our Custom Template Image.

In this example I used a Custom Template Image based on Windows Server 2016 with Office 2016, Notepad++ and Paint.NET installed as the sample custom applications.

The end result for the end user is that the custom applications are available and accessible in for example RD Web Access as shown below. 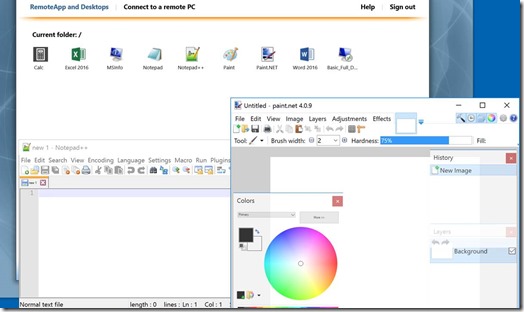 Again using the existing Custom PowerShell extension, these settings are now changed suing PowerShell Cmdlets and the changes are visible to the end user. Obviously these 2 items are not rocket science, but you can image we could extend this to brand the entire Web Access page if we wanted to including colors, fonts etc. 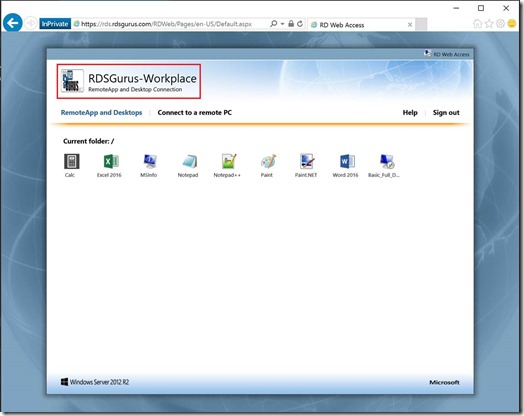 To summarize this article, using ARM and JSON we are now able to;
– Configure the desired Licensing method (User or Device CAL’s)
– Use a Custom Template Image for the RDSH role
– Publish Custom Applications
– Perform basic RD Web Access branding

If you have questions on how certain parts of this deployment have been performed, feel free to reach out to me! Stay tuned for more updates on this RDS deployment in Azure IaaS using ARM!